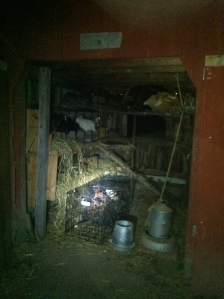 This is how the coop looked last night when we closed up the chickens.

We let them go in and roost and, once they were settled, we grabbed the seven roosters slated for culling and crated them.

If you ever need to move a chicken, it is advisable to do it at night.  They are calmer and less on-guard.  You won’t have to chase them; you can just pick them up and move them.  We left them in the crates overnight to make the morning’s processing go more smoothly.

When trying to determine the right timing for culling roosters, it is best to pay attention to their behavior.  As soon as they start to crow, you know you are getting close.  Some people wait a month after they hear the first crow; we waited until the roosters were acting like such assholes we couldn’t put up with their nonsense anymore.  They’d begun harassing the hens and making a general nuisance of themselves.  We were happy to see them go. 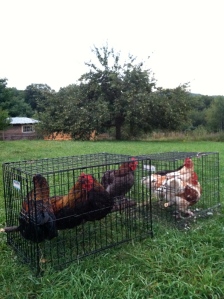 Once the morning chores were done, we were ready to start the process of culling the roosters.  Having never done this before, we’d read a great deal about how to have the experience go smoothly for all involved and felt we were ready.  We felt pretty strongly that the other chickens would be oblivious to what we were doing, but moved the processing setup out of their direct line of vision anyway.  Having them crated and waiting in the morning was really great.

We’d made our kill cones (see Part One of this blog post), and had fashioned some flat pieces of wood into a striking mallet for knocking the chickens out before cutting their throats.  While a quick cut to the jugular is considered a very humane way to kill a chicken, it doesn’t change the fact that the bird is still bleeding to death.  We felt that to render each bird unconscious prior to the cut was the right thing to do. 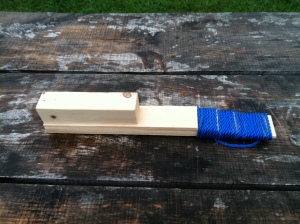 The striking implement was simply some scrap wood nailed together to weight it more heavily at one end.  The other end was wrapped with nylon string to give the striker a comfortable place to grip and avoid slipping.  This worked very well.

The hard part for me was actually hitting the bird hard enough to knock it out.  I failed at my first attempt and ended up having to chase a pretty angry rooster around the yard until we were able to catch it and try again.  This experience was enough to make me decide that perhaps I was more of a cutter than a striker.  Dave and I traded jobs and had no trouble from that point forward.

In an assembly line that would have made Henry Ford proud, we processed the roosters one by one.  Dave struck and coned, I cut and bled.  The cutting is actually quite simple, but then you have to hold on to the bird’s feet until the bleeding is complete, as there is a fair amount of movement until that point.

Once all the birds were killed, we were ready to start the process of cleaning them, inside and out.  I volunteered to do the out.  Because these birds are destined to be chicken soup, we elected not to pluck them.  We set up a station of sorts, hanging the birds from their feet to be able to free them from their skin and feathers without too much effort. 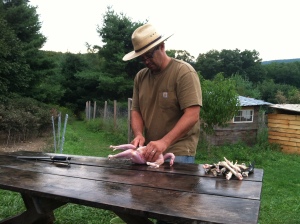 Having removed the skin, crop, and feathers completely, the bird was then taken down and sent over to Dave to be eviscerated and washed.

By the time he was finished, all seven birds were completely clean and ready to bag for the freezer, awaiting the day when we make them into soup. 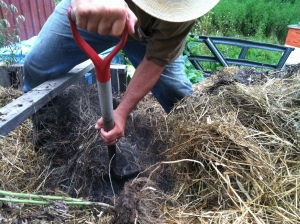 The last stage of this process was disposing of all the blood, feathers, heads, feet, and internal organs.  Because these were not pieces we wished to use, we decided to introduce this material into our compost pile.  Our compost is so hot right now, even just shoveling it out a little lets off a huge amount of steam.

We dug down into the very heart of the compost and dumped all the poultry material in there.  We covered it well to keep other animals from nosing around and will let the heat of the pile work its magic.

When we were completely cleaned up and the birds were in the freezer, it was 9:00 a.m.  We stood back and were fairly amazed at what we’d just done.  By culling these roosters, we’d solved three issues at once: 1) the roosters would no longer harass the hens, 2) they would no longer eat huge amounts of feed and corn and cost us a small fortune, and 3) we now have the start for six pots of chicken soup.

So, applewood farm is now down to 48 chickens.  Hopefully, we will start to collect more than seven eggs a day.  Sigh.