Posted on September 19, 2013 by applewoodfarm

This coming Sunday will be yet another Pig Day.

We have adopted this euphemism to refer to the days when one of our happy pigs will make the transformation from pig to pork.  One of the many things we’ve learned over the past year has been that finishing one pig on Pig Day is the perfect amount.  Trying to do more than one pig has many drawbacks; keeping it to one has allowed us to be reverent and methodical, completing the work in a timely and efficient manner. 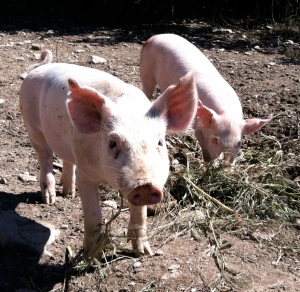 We currently have four pigs.  The two larger pigs are hovering somewhere around 200 pounds each and the two smaller, merely piglets, are probably around 50 pounds each.  Our plan has been to finish one pig Sunday, and the other one sometime over the next two to three weeks.  The piglets would then grow with us over the next couple of months until they reach slaughter weight (around 200 pounds) and follow in the hoof prints of their predecessors.

A few days ago, one of the piglets started coughing.  Now, a pig cough is not completely unexpected as they are prone to certain bronchial infections from time to time.  One of our first-ever pigs had a cough that seemed to bother us more than it bothered him.  We chose not to treat it, and it never escalated or became anything more than an occasionally noisy irritant.  This current piglet’s cough, however, seemed to really come from deep down and the sound of it made me wince every time.

After a couple days of hearing this, Dave and I agreed we should get the piglet some antibiotics.  Being strongly opposed to the use of prophylactic antibiotics in animals, it was important for us to be able to recognize an animal in distress and be willing to get that animal the treatment it needed to relieve it of its suffering.  We called the vet.  We got the meds.

As (our bad) luck would have it, the medication came in the form of three syringes and a bottle of medicine, with instructions to administer one injection every three days subcutaneously.  Now, a subcutaneous injection on any creature is a challenge, but on a pig there is precious little real estate that has extra skin that can be pinched and lifted.  Unlike dogs and elephants, pigs are making pretty efficient use of their skin.  We weren’t looking forward to the procedure.

Since it was a hot and sunny day, all four pigs were napping in the relative cool of their pig shed when I went in, armed with a syringe and a smile.  Immediately, the other three left as though they knew it wasn’t them I’d come there to see.  Our little coughing friend was sitting in a way that made me curious.  He didn’t get up when I came in and he didn’t look particularly well.  Upon closer inspection, I saw that he appeared to be bleeding.  Upon closer closer inspection, I saw that he had what appeared to be one of his internal organs hanging out of his butt.  Otherwise, he seemed fine.  Dave came in and looked and we agreed that this must be what a prolapsed rectum looks like.  Our little friend perked up and ran outside, seemingly unfazed by the fact that he had recently coughed his ass out.

Unsure of how to proceed, I called Bernie the Pig Farmer.  After describing the situation and asking Bernie what he would do in our situation, Bernie responded in his wonderfully thick Massachusetts accent, “Yeah, that’s nawt good.  That’s nevah good…  I’d eat him.”  Just for good measure, we spoke to our vet who echoed Bernie’s sentiments that a prolapsed rectum on a piglet was not good, would never be good, and that we should just eat him.

We knew that this was what we would have to do.  The thought occurred to us that, in the meantime, leaving the prolapse out could potentially cause pain or infection, or at the very least, attract flies.  Thinking we might be able to help, we grabbed some plastic gloves, iodine, and water, and attempted to catch the piglet to try to push the rectum back in.

Here, I think it would be a useful exercise for the reader to squeal like a piglet does when being chased by humans for an unknown reason.  Notice what happens to your sphincter muscle.  (No, seriously, if no one else is around, do this)

So, because of this physiological reaction, we were unsuccessful in our endeavors and our little piglet’s prolapse remains.

We will care for him as best we can between now and Sunday, maybe giving him a few extra apples and tomatoes to make his brief life a little brighter.  We will squeeze in a few belly scratches (if he’ll let us anywhere near him after today) and just generally try to make the best of a really unfortunate, unexpected situation.

And, in the spirit of keeping things light, I am compelled to quote our friend, Lee, who said, “He coughed so hard, it rectum.”

2 Responses to The Precipitate Piglet