We have some beautiful roosters.

Our main man, Tough Guy, is a Black Copper Marans and he, quite literally, rules the roost.  The hens belong to him and he is strut and swagger from crown to talon.  He’s a truly gorgeous gentleman and his authority has never been in question.

Over the past six months, the remaining three roosters (the ones we didn’t previously cull) were allowed to stay and roam and get their kicks where and when they could.  The only rule was that they couldn’t rock the boat: they had to play nice with the other roosters, go easy on the ladies, and do their part in protecting the flock.  Over the past couple of weeks, our two Brahma roosters seem to have forgotten not to be COMPLETE and TOTAL jerks and, as a result, earned themselves a date with the kill cone.

I mentioned previously that I’ve been spending a great deal of time down in Brooklyn lately.  The three-hour each way commute three or so times a week has been starting to wear on me and today was no exception.  Arriving home around 3:00, I was not in the world’s greatest mood.  Hearing panicked squawking from the chicken coop was not the sound I was hoping to come home to and when I checked to see what was the matter, I found the two Brahmas viciously attacking Favorite Hen.

This did not sit well with me.

Normally, when we cull roosters, we wait until they’re settled in for the night on their roosts and gently lift them from their spot.  We transfer them into a crate in the coop for the night and then they are all confined and ready to finish off the next morning.

But this time I was mad.

Instead, I spent the next 20-30 minutes chasing them in and out of the coop, around the fence, past the goats, across the pig sty, back into the coop and out again, until I finally caught one.   Feeling that Karma would have wanted it this way, I decided the time was perfect for dealing with our rooster problem. 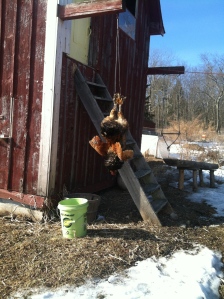 Transitioning to a far more useful and pleasant purpose

Within three minutes, this beautiful jerk was making his transformation from hen bully to future soup.

Oddly enough, his Brahma buddy (the one I didn’t manage to catch during the chicken-chasin’-hijinks) stood about 20 feet away throughout the processing and seemed to be watching the entire affair.  He was there for the bleeding, the hanging, the plucking, and the cleaning.

Because he’d made me so mad, I was making small talk with him as I processed his former partner-in-crime.  As any utterly insane person might have done, I asked him if he SAW what happened and if he now understood that there are consequences to our actions.  At no point did he respond.

This was when Dave stepped in and carefully took the knife away from me.  Fearing for my sanity and, undoubtedly, the well-being of the remaining farm animals, he felt it prudent to disarm me swiftly and quietly.

Dave finished cleaning the bird, preparing it for the pot in his practiced and skillful way.

The cannibals descend upon the wreckage.

Whenever we clean a rooster, there tends to be a good deal of feathers, skin, and other bits left behind on the ground.  We leave it there for other animals to find so they may eat what they can, rather than us just discarding it.

The trouble with this process is that CHICKENS EAT CHICKEN.

They also are incredibly gross.

So, as soon as we were wrapping up the job, at least half of the flock was on self-appointed clean-up duty.  Shamelessly pecking at the remnants of their former friend, scavenging for the best bits, and even fighting a bit for the ones they might’ve missed.

But there was one chicken who was decidedly NOT part of this process.

4 Responses to The Mad Rooster Culler