The other day, my friend Malene called to ask if I’d be interested in adopting a goat from her friend, Terry.  She said that Terry’s second-to-last goat had died the night before and this left Janie, an eight-year-old Nubian-Saanan mix, all alone and lonely.

I’ve been offered goats before.

It’s kind of funny, actually.  Once people learn that you have goats, all of a sudden, everyone is looking to unload a goat on you. 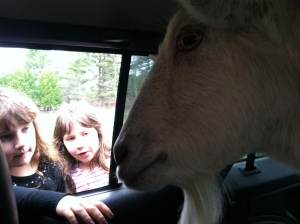 The thing about goats is that they are susceptible to all sorts of crazy illnesses and diseases, must be fed carefully and given minerals even more so, and sometimes do really off-the-wall wacky stuff like produce milk when they haven’t had kids.

We decided to go for it with Janie because we felt bad that she was lonely and we also thought she might be the answer to our goat kid dilemma.  Now that Dot is old enough to be bred (almost nine months), we were thinking it would be nice to start that process.  The problem is that we’d have to take her somewhere to breed her since we don’t have a buck on our farm.  If we took her away for a day or two, Ramyu would be left all alone and we would feel badly for him.  Having a third goat in the mix relieves us of that worry.

But, the question remained: how would it be to introduce an eight-year-old goat to our still growing babes?  Would everyone get along?  Would there be fighting?  Drama?  Romance?  Espionage?

But not too very much.

It was interesting, actually.  Upon arriving home with Janie, we tried to move her to the goat enclosure.  She was stubbornly holding her ground or moving in the opposite direction from where we were leading her.  Once she heard Dot and Ramyu’s bleating, however, she made a beeline for them.  There was no doubt she was happy to be with other goats again.

Still, the introductions had to be made and dominance established.

Everyone got right down to business.

Being the oldest and the biggest, Janie was immediately and unquestionably the alpha goat (if there is such a thing in the world of goats).  Ramyu gave it all he had, but horns or not, the head-butting tournament ended with Ramyu assuming a deferential position and Janie holding her hairy chin just a little bit higher.

Now we are a couple of days in and the three goats have been napping together, sharing food, and generally getting along like old pals.  We wanted to wait until Janie seemed more relaxed before trying to milk her, so today was the day to give it a shot.

We set up the milking stand so that she would have to get up on it to get a treat at “snack time.”  I poured some goat treats into the feed holder and she jumped right up and put her head through the stanchion, allowing me to close her in and see whether she truly was milky or not.

Turns out, Janie is what is called a precocious goat.  This is when the goat produces milk without having kidded (although she has kidded in the past, but it’s been a year or two).  The milk is produced hormonally and is perfectly good to consume.

We won’t use the first milk because we didn’t go through the proper sanitation procedures prior to milking and also because today’s milk had been in her udders for quite some time.

As we begin to milk her daily and follow proper udder care, the milk will be usable once again and we can resume the cheese-making that we had to abandon when Cindy died last year. 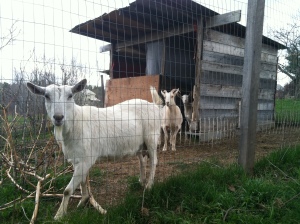 So, we are back to three goats and, hopefully, will find ourselves with kids again in about six months.

4 Responses to She’s Not Kidding