These Chicks Have Two Mommies (or, It Takes a Village)

One by one, our hens have gone broody over the past two months. Fifteen new chicks have joined our flock in that time, hatched from four broody mamas.

And now there are even more.

These new chicks came from a clutch of nine eggs that had been started by a broody hen who gave up on being broody after a couple of days. I don’t know whether she got bored or distracted or just had a change of heart about becoming a parent, but whatever her reason, she left one day for a pack of smokes and never came back.

Two broody hens, sitting on nothing but pine shavings.

As luck would have it, two of our other hens went broody that same day. They plopped themselves side by side in the small coop and hunkered down for a sit. The only problem was that neither of them was on any eggs.

You’d be amazed at how unimportant the presence of actual eggs seems to be to a hen ready for sitting. I always wonder if they think the chicks will appear miraculously at some point; I certainly do my best to help maintain the illusion.

Noticing this shift in parentage, I grabbed the nine abandoned eggs and stuffed five under one hen and four under the other. Then we all waited three weeks to see how many MORE chicks we’d have (answer: seven).

But here’s the really interesting/weird/unusual/it-takes-a-village/co-parenting/communal-living/when-two-hens-love-each-other-very-very-much part: The two mamas are almost never out of direct physical contact with one another.

This is exceptionally strange because new mama hens are territorial, hyper-protective, and even aggressive, if need be.  They typically want no one, hen nor human, anywhere near their babies.  I’ve never seen one act any other way.

All of their eggs hatched within eight hours of each other.  Another eight or so hours later, I moved them each down to a crate on the floor with their respective chicks.  When I checked back later, they had moved themselves together.

I decided that the one hen must have moved because the sideways bin was easier to access than the upright milk crate.  I figured they’d eventually come to some sort of highly-evolved, civil agreement that would sort itself out in the form of a shared living arrangement that suited everyone.

This morning, they took their snuggly antics outside.

And lest you, dear reader, are misled to believe that these ladies are too besotted with one another to care properly for their young, please rest assured this is not the case.

If you look closer, you will see evidence that they are not only snuggled together, they are also snuggled atop their (now shared) clutch of newborns.

All seven of the little ones are tucked safely underneath both mamas. 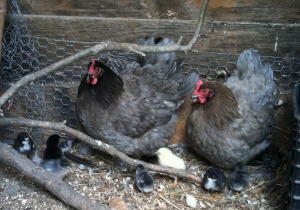 The Gang of Nine

And this Gang of Nine goes nowhere without each other.

At no time does one mama break away from the pack with her own chicks.

I’m starting to wonder whether they even know which chicks were hatched by whom.

I’m starting to think that neither of them really cares.

And I’m really starting to wonder if this hen couple wasn’t already a couple long before being further united by broodiness.  I mean, this whole story reads quite a lot like our two girlfriends who wanted children and found a sperm donor and ended up with triplets.

3 Responses to These Chicks Have Two Mommies (or, It Takes a Village)