Posted on December 7, 2014 by applewoodfarm

Early this spring, we added about a half dozen leghorn chickens to our flock.

Of these, only one turned out to be a rooster.  And he is a beauty–pure white with bright red comb and wattle–really, he looks exactly like Foghorn Leghorn.

As the summer went on and the chicks hatched and grew, we watched a depressing number of the new additions start to develop the tell-tale traits of roosters.

While the sad reality is that about half of all chickens are roosters, small farmers will continue to hope that somehow the hen-to-roo ratio will become more like 99:1.

As it is, applewood farm is currently bursting at the seams with chicken testosterone and culling time is nigh.  For us, two roosters is the perfect amount.  This way, one is the Main Man (clearly in charge, looking fabulous, taking care of all the ladies) and the other one is there as an understudy of sorts, in case backup is needed, or a fox eats Main Man.

Dave and I have been discussing how our plethora of roosters has coincided nicely with Chicken Soup Season and were just getting around to dusting off the kill cone when it happened.

Coming home from work, I noticed Foghorn in the dog crate.

Now, the dog crate is for almost every creature except the dogs.

During the day, this hay-lined crate is a favorite laying spot for the hens.  At night, the barn cats tend to snuggle up in there.  Occasionally, a wayward hen will forget her way to the coop and spend the night there.  Never before have I seen a rooster in there, and never before have I seen Foghorn looking timid.

As I got closer, I realized that all the eggs from the day were still in there with him, but they were all covered in blood. 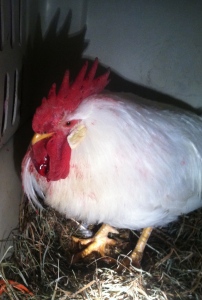 Looking more carefully, I realized that Foghorn was not only covered in blood, but he was still actively bleeding.  His wattle looked torn, he looked shaken, and I really just wanted to give him a hug, take him inside, and clean him up.

But because I like him, I left him alone.

I brought him some food and water and closed the crate to keep the other jerks away from him.  Undoubtedly, there was some kerfuffle about dominance or manliness or whose wattle was the most flappy.  Whatever the issue, it was clear that Foghorn lost and sought shelter in the crate where he could bleed quietly and without further ado.

Tomorrow we’ll get him some Blukote to keep the area from getting infected.  We’ll probably keep him in the crate for a day or two to protect him from additional attacks while he heals because, horribly, chickens love blood and will eat it AS IT IS BEING PRODUCED.

In the end, Foghorn is gonna be just fine.

As for the rest of the roosters… Well, I think we’re gonna have a whole lotta soup very, very soon.