The Boy Who Lived

Posted on December 26, 2014 by applewoodfarm

We have found ourselves inundated with roosters of late.

Now, in a flock of about four dozen chickens, give or take, you really don’t want/need more than three rosters, tops.  I’m super happy with two.

In wintertime, when the hens are barely laying, and certainly not broody, a rooster is strictly ornamental.

A rooster in winter is like a teenage garage band–unpleasantly noisy and serving no useful purpose.

So, once again, it was time to cull.

We planned the Great Rooster Thin Out for the Friday after Christmas.  We’d both have the day off work and we’d planned to finish a pig that day anyway, so it seemed like a good plan.

The problem was that when I went to close up the chickens one night after work, I found Foghorn, our beloved Leghorn rooster, splattered in blood having clearly been brutalized again.  He was standing alone on a roost in the smaller coop and there, on the other side of that coop, clustered in a circle, was the thuggish crew of motley bully roosters who had given him his second beat-down in a week.

And something in me snapped.

I decided it was time to cull.  Right then.  In the dark.  And I was poorly equipped for the job.  But I was really, really mad.

Let me pause to say that, in retrospect, revenge killing in the dark, alone, by flashlight is not recommended.  Better to follow the original plan, be prepared to do the job properly, and have all the tools you need for success.

I won’t go into the unpleasant details, but suffice it to say that we had two fewer roosters when I went back into the house, and none of the three of us felt better for my having done that.

But there were still more roosters.

On Christmas night, we went out to close up the chickens.  We decided to separate the Death Row roosters from the Gen. Pop. flock to make it easier in the morning.  Somehow, we only came up with four roosters that needed to go.  I could have sworn there were more, but we looked and looked and only four seemed dispensable. 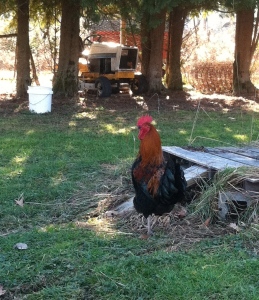 We’d decided to keep a healthy and beautiful Black Copper Marans rooster that reminded us of the late, great Tough Guy.

While the BCMs aren’t the best layers and tend to be more destructive of our property than other breeds, you can’t deny how regal and imposing the roosters of their ilk can be.  At the end of the day, good breeding stock is good breeding stock.

So this one lived.

We also have a gorgeous and friendly Olive Egger roo named Pony Boy who has been with us for awhile.  There was no debate about keeping him, so that made two. 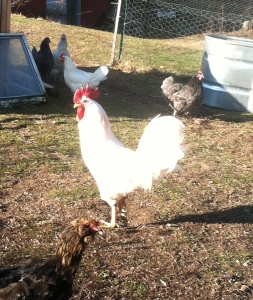 The last one we meant to keep was a beautiful, unmolested Leghorn who has yet to be named.

Over the past week or so, we watched his plumage develop in the most beautiful way, clearly expressing his dominance.

His comb is a bit frostbitten, but other than that, he’s got what it takes to keep a strong line of healthy chickens coming our way.

Since Leghorns lay white eggs, we aren’t super excited about having many of them, but it actually makes a nice change from the brown eggs the majority of our flock lay. 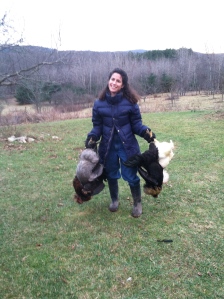 A girl and her birds

So, when it came time to cull, we felt confident that we’d kept who we meant to keep and would kill who needed killing.

So, when the job was done (this time with the correct tools, in the light of day) and the process of plucking and butchering was in full swing, you can imagine our surprise to see a FOURTH rooster wandering about the farm.

This was not a special rooster in any way, it was simply a rooster that had eluded capture the night before.  Tucked in among the hens, he must have just gone unnoticed when we selected who would stay and who would go. 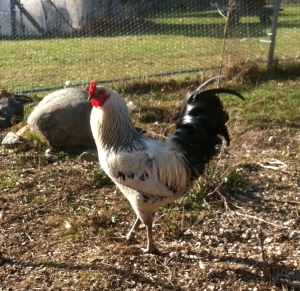 And, as if he knew this and wanted to put a fine point on it to boot, he literally walked around us as we processed his former coopmates, occasionally pecking at a fallen feather, or the rubber of our boots.

And so, one boy got to live to see another day.

4 Responses to The Boy Who Lived