You Can Lead a Duck to Water…

Posted on December 15, 2015 by applewoodfarm

We have roughly 50 chickens living on applewood farm at the moment. Two of these chickens are ducks.

The chicken-ducks look like regular ducks, but they hang out with the chickens all day, eat chicken feed, and don’t have any instinct for finding water.

While we don’t have a great deal of natural water nearby, we do have a tiny pond-like situation just beyond the back garden.

The ducks have been there; they know where it is. But, like the chickens, they simply will not go there on their own.

Because normal ducks are water birds, and because we do have a tiny pond, I feel strongly that these creatures should swim in the pond.

So, I chase them there.

I follow them around the farm, shooing them away from the trees and the bushes and the roaming gangs of chickens until they have no choice but to follow the path to the pond.

Once there, they will waddle down into the water and swim and bathe.

For about a minute and a half. 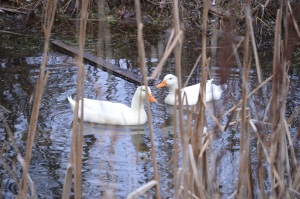 The chicken-ducks reluctantly pretending to be real ducks

And then, presumably because they are actually chickens and not ducks, they leave the pond and head back over to wherever they were before I came along.

Now, because there is no other natural water source, we keep a restaurant bus tub of fresh water near the house for the chickens and barn cats to drink. The tub gets rinsed out and refilled almost every day because it gets pretty dirty pretty fast.

One day, I noticed that it got REALLY dirty REALLY fast and that this continued to happen day after day. That was right around the same time that I noticed the feathers.

Not long after that, I discovered this:

So, it turns out that the “ducks” prefer drinking from, and bathing in, a half-filled bus tub of marginally clean water blessed by chicken beaks and cat tongues over a reedy pond with delicious muck and plant life.

Maybe I’ll work on teaching the chickens to swim–there’s a perfectly good pond going to waste.

7 Responses to You Can Lead a Duck to Water…