Posted on February 11, 2016 by applewoodfarm

This past Sunday, we finally finished the last two pigs from our original Gang of 14.

We really should have finished them sooner, but time hadn’t been cooperating. And when you only have two pigs left, you have to be able to finish them together; you can’t leave one pig all alone. They are far too social and, in winter, they need each other to help stay warm.

This winter has been significantly milder than the previous two. We’ve seen only a handful of days with below-zero temperatures and snow has been infrequent at best. Still, it’s a rough gig being a naked pig on icy-cold nights.  As the days passed without us finding the time to organize a kill, I wondered how our last two ladies were managing.

Turns out, pigs have mad skills in the HVAC department. I knew they were excellent at keeping cool in the summer through their deliberate and totally obnoxious use of water (spilled out of their drinking troughs) to make refreshing mud baths, but how they kept warm in winter seemed more of a challenge to me. So, I skulked around them for awhile to see what they’d been up to.

When you finish pigs yourself (as opposed to sending them out to an abattoir), you see everything from the death to the scalding/scraping to the hanging/evisceration to the butchering. The scalding/scraping part is the hardest because you need to lower the animal (usually somewhere in the neighborhood of 300 lbs.) into a tub of scalding water to loosen the skin and hair enough to make scraping possible. You then need to lift it back out of the tub and onto a table where you scrape off every last bit of skin and hair.

In the summertime, this is pretty easy. The skin stays warmer longer and the delicate hair doesn’t provide much resistance. It’s a better job for colder weather, however, because being able to hang the pigs in 25 degree temps allows us to work without the pressure of time (no flies, no danger of the meat getting too warm) as well as allowing us to hang the animals until we are ready to butcher.

A pig in 25 degree temps, however, has grown long, luxurious locks of wavy, coarse hair over her entire body.

By the end of January, the amount of hair on our girls rivaled that of our dogs.

There was no way these pigs were getting scalded and scraped–there was simply no way to work fast enough in the cold to remove that level of hair.

The other notable effort in the pigs’ efforts at keeping warm is what I can only describe as a Pig Nest. 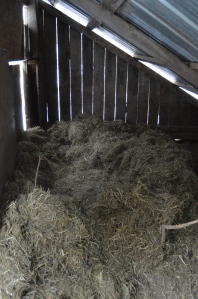 Their shed is a short, angled structure filled with hay bales in the winter, which we let them break up however they please. As the days get colder, they pleased to build an actual nest, which they used to snuggle in whenever they weren’t eating (roughly 23 hours a day).

I didn’t manage to get a shot of them in their nest, but they would lie in there, yin-yang style, and I swear the temperature in that drafty little structure would hit at least 20 degrees higher than whatever it was outside.

Those porkers are insanely efficient.

And, as it turns out, the legacy they left behind reached beyond a Great Deal of Pork. That pig nest has almost instantly become a favorite laying spot for the chickens.

Maybe they’ll grow into it.