Spinning Out of Control

I had absolutely no intention of spinning honey today.

I hadn’t even planned to check on my bees, really, but then I noticed that one of the hives had an alarming absence of activity.

Upon closer inspection, I saw that the mouse guard had been moved from the entrance and when I dug around the main entrance, I was greeted by the wreckage of thousands of bees.

Now, unless the bees themselves moved the mouse guard so they could collectively decompose in a pile at the foot of the hive, my guess was that we had company. 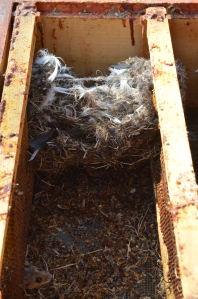 While this hive had been alive and well just a few weeks ago, today it was a buzz-free crime scene. When I opened it up to take a look, my worst fears were realized. The hive was silent and, as I disassembled super after super, I encountered at least three complete nests, four scurrying field mice, several ruined frames, and a whole lotta honey.

The mayhem unleashed within the hive body by these miniscule morons is impressive, to say the least.

Now, not every mouse that moves into a hive will destroy the hive. Since bees focus all their energy on caring for the queen throughout the winter months, a mouse that gets in will live fairly unimpeded, eating honey and wax and hunkering down until spring. Once the weather warms up, however, an unlucky mouse will find itself the subject of a bee onslaught reminiscent of Hitchcock’s birds.

Our mice fared much better.

It seems as though these guys managed to work their way through the one super that happened to be housing the whole colony. While this devastated the bees and did extensive damage to the frames, it did leave a significant stockpile of honey that I had no choice but to spin.

And this is where a perfectly pleasant day turned impressively haphazard in a short couple of hours.

I guess I’d never appreciated how much organization and planning a day of spinning out honey required. After today, I feel it is fair to say that one should not “hurry up and spin some honey.” Because that’s what I did.

I quickly unpacked and washed the equipment, shlepped the honey-heavy frames up to the deck, filled a bucket with hot water, and dropped a couple of frames into the spinner.  I started trying to crank the arm when I remembered that I needed to secure it to the ground for stability, so I hammered a few nails through the feet and resumed spinning. A moment later, it occurred to me that I’d completely skipped the step of uncapping the honey (this is especially important if one wants the honey to be released from the frame) and was simply giving the frames a county fair-style ride.

Wood slats and foundation wire and beeswax, oh my!

Once the frames were appropriately uncapped and spinning, things really started to go south. I’d assembled a number of new frames back in the autumn and had, apparently, used the wrong size nails.

This resulted in frame after frame simply falling apart in my hands, leaving me with dripping, sticky hunks of honeycomb that couldn’t possibly be spun.

Superglue is my friend

As the frustration mounted, I persevered and, as I started to spin the next frames, one of my plastic spinner lids popped right off and cracked in two–one half flying across the deck and the other dropping INTO the spinner.

I did not start crying.

But I was losing daylight and the temperature had really started to drop. All I could do was start a fire in the wood stove and move the whole operation inside. The only way this project would ever be complete was if I was able to warm everything up enough to allow the honey to really flow.

I enlisted the help of my daughters to hold the spinner steady while I cranked the handle and, eventually, we got through the whole slapdash production, warts and all.

Losing a hive is depressing. It is not the end of the world, however, and I will make a split of another hive at the end of May and start again.

But this time, I’m paying the cats extra to sit sentry.

7 Responses to Spinning Out of Control