Posted on December 25, 2016 by applewoodfarm

Recently, a friend approached me about taking in her ducks and chickens.

She was getting ready to move and her new digs wouldn’t allow for poultry. I mentioned that we had plenty of space for birds since our flock had been largely wiped out last spring, so it seemed a perfect solution for both of us.

Earlier this month, we had this text conversation:

Her: Were you serious about taking my ducks?

Me: How many are there?

Me: If you could help with feed, we could totally take them. Are they Pekins?

Her: 3 Runners, 1 Pekin, 1 French Toulouse Goose, 2 Mallards, 2 Rouens, 1 Swedish, and I’m forgetting someone. There are about half a dozen chickens too.

Me: I’ll take ’em all but the goose. I hate geese.

Her: Okay. Maybe I can find another home for him.

Her: Yeah, he’s a dick. His name is firefly.

Me: All geese are dicks. His name should be Asshole.

So, with the ground rules being established, we proceeded with the adoption process.

She crated up all the birds and delivered them to their new home on applewood farm.

Having only had Pekins previously, I wasn’t familiar with all these other duck flavors. It took all of about 30 seconds for me to fall completely in love with the Runners. Unlike regular ducks, these guys stand up straight and run instead of waddling. They are hilarious and goofy and Jim Henson would have had a field day anthropomorphizing them.

The only discernible difference between the Mallards and the Rouens (that my untrained eye could find) was that the female Rouen has a splash of vibrant purple on her wing tips. Otherwise, I’d be hard-pressed to tell one from the other. The Swedish, on the other hand, looked like a Pekin that had a bottle of ink splattered all over it. The whole gang won me over fairly instantly; I guess I’m a duck girl.

It took about two weeks for the new ducks to settle into their surroundings.

At first, every time we went in to feed or water them, all ten of them would be huddled in their coop. If we went into the coop to flush them out toward the feed and water, they would flail spastically into one another, stumbling and running out the door. The minute we would come out of the coop, however, the whole motley crew would hurry back inside without ever getting anything to eat or drink. I had to hope they were finding sustenance when we weren’t looking.

The chickens had none of these issues.

All of the hens immediately made themselves at home in the coop and yard, scratching and pecking and behaving an awful lot like chickens.

We’d been alerted that, while unremarkable in every other way, one of the hens required something in the way of human affection as often as possible.

This particular bird will come right up to you when you’re filling a waterer or a feeder and simply stand nearby awaiting her cuddle.

We, of course, are happy to oblige.

Aside from Snuggle Chicken, the only need the birds really have that require much from us is The Watering.

Without a natural water source available to them or us, we have to drag our Extraordinarily Long Length of Hose from the house to the coop every time they need water, which is always. In the summer, we can leave the hose out and simply provide water as needed. In the winter, however, if we don’t roll the hose up in the cellar, it will freeze overnight and make it impossible to use. When the hose is set to “Impossible,” we must resort to lugging five-gallon buckets of water from the house and that, my friends, sucks really hard.

Ducks without water are unhappy ducks.

There’s not much they love more than swimming and bathing and splashing. Keeping a bath in freezing temperatures is generally impossible, so we try to do the next best thing…

We literally just stand and hold the hose while the ducks take turns walking through, or standing in, the blast of water.

The longer we do it, the more puddles and rivulets form from which all of the birds quite enjoy drinking. Nothing quite rivals the spray of the hose, though, and the ducks are impressively equitable–ensuring that everyone who wants a turn gets one.

Once I saw how much they enjoy it, it really just served to make me feel badly on days when my schedule wouldn’t allow for Sprinkler Time. 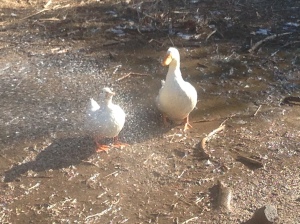 But, today is Christmas and I don’t have anywhere else to be. If anyone needs me, I’ll be down at the coop, watering the ducks.