Posted on March 6, 2017 by applewoodfarm

My hives died this winter.

This is the first time since starting my hives in 2013 that they haven’t survived and I’ve been anxious to know what killed them.

Bees in this country are generally in a hurry to be obliterated by one thing or another. If they’re not huffing pesticides in the big apiaries like teenagers around a bong, then they are prone to infestation, starvation, freezing, neglect, mold, moths, and mice–among other things. Those last three are typically not the cause of death, but rather opportunistic pseudo-parasites that move on in once the hive is already compromised or demised.

I once thought I lost a hive to wax moths and was informed that no, I lost a hive due to my own negligence and the wax moths would like to thank me for my inadvertent generosity.

Going into the winter this past fall, I ensured that my hives all had plenty of honey (the rule of thumb is 70-100 pounds of honey per hive) and even topped each hive with a bee patty for good measure in case it was a particularly mild winter and the larvae were peckish.

But here’s the thing about winter bees: it doesn’t matter how much they have to eat if they aren’t close enough to the food.

I knew this and yet I left the honey super on the bottom of the hive, rather than moving it up one. I was figuring the bees knew where it was and would situate themselves accordingly.

I was, once again, figuring wrong.

A sign that your hive may have starved to death is comb filled with “bee butts.” This will be a tremendously sad, bummer of a discovery if you love your bees as I do. The bees will be face down into the comb, having died during their desperate search for a snack. 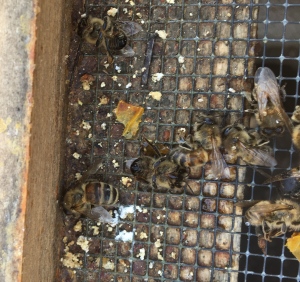 While the Bee Butt Factor was high in my hives, there was also a small (but not insignificant) amount of white debris at the bottom of the hives.

While this could just be crystallized honey, and I think that it is, it could also be evidence of varroa mite infestation.

Varroa Mites are also known as Varroa Destructor, but whenever I hear that term, I envision a giant tick-like creature wearing a cape. 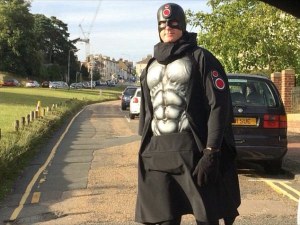 I am Varroa Destructor.

Varroa are tiny little sinister dickheads who have absolutely no respect for personal space. They may be the most insidious of all parasites in their methodology.

To enter a hive, varroa literally hitch a ride on the body of a drone and enter right through the front door in a totally sinister piggyback ride. Once inside, the mite will seek out some young, sexy nurse bee and attach itself to her, sucking her blood while biding its time.

When bee larvae is eight days old, they emit a pheromone signal to let the nurse bees know it is time to cap their cells. The problem is that this same signal is registered by the mites as a signal to enter the cell, which they do, snuggling down into the royal jelly beneath the larva. If that weren’t despicable enough, the mites actually use a snorkel-like feature to be able to submerge themselves entirely and still be able to creepily breathe.

Once capped in the cell, the mite will begin eating the growing larva and laying eggs. There

Stolen internet picture of two mites on a bee

are about five eggs laid–the first one being male and the rest female. These siblings then mate WITH EACH OTHER, making demented little inbred, cross-eyed mites, and emerge from the cell having mortally wounded the larva inside and embarking on their journey of Really Gross Destruction.

I really need to work on my sloppy beekeeping.

Luckily, Friend Maggie Who Doesn’t Kill Bees is willing to help! She is going to set me up with a nucleus colony this spring so I can restart my hives and, if that weren’t enough, she is going to ensure it is a robust nuc that can potentially be split this summer.

I will try not to kill them.

3 Responses to A Mite Hungry