While I’m sitting around waiting for Cindy to kid (aaaaaaaaaany minute now…), I thought I might mention that our Black Copper Marans eggs have started to hatch.  Of the dozen eggs we put in the incubator 22 days ago, 10 were fertile and three have hatched.  Of those three incredibly adorable chicks (see picture of incredibly adorable chicks), one has something known as Spraddle or Splay Leg.  This is a condition caused as a result of a newly hatched chick not being able to get good footing (in either the incubator or other hatcher or the brooder) right after hatching.  It looks like this: 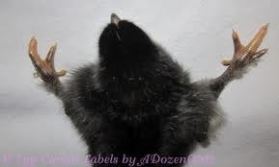 This is not a pic of one of our chicks.  I didn’t think to take one of ours, so this is a stock image, but ours looked almost exactly the same.

After reading about what caused this little chicks legs to spraddle, I was awash with guilt.  The description basically told me that I’d provided an inadequate amount of traction for the chick’s feet to find purchase and it was all my fault and I’m a terrible parent and I shouldn’t be allowed to care for living creatures.

When I got past that, I read about what could be done.  This is the really cute part.

Turns out, the pad of a smallish (3/4″) Band-Aid is the perfect “prosthetic” to correctly space the chick’s legs apart.  Conveniently, the bandage comes with its own adhesive strips that simply wrap around the chick’s legs.  The operation took two of us; Dave held the chick while I wrapped its legs.  When we put it back in the brooder, it fell repeatedly onto its face and couldn’t get up.  It did this about six times.  I kept righting it until I felt fairly confident it was just going through a learning process and could, in fact, manage to function with the bandage on.

When I came down this morning, I actually had trouble telling it from the other two chicks.  It was upright and mobile and seemingly well on its way to being alright.  Here’s how it looked (the picture is a little cloudy because it was taken through the side of a plastic container): 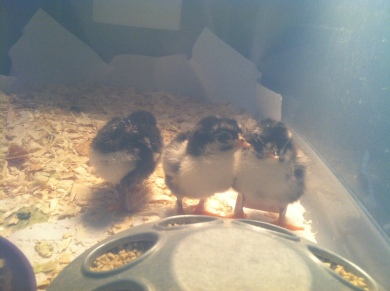 The chick on the right is the one with the bandage.  You can see it pretty clearly in this pic.  Apparently, the sticky part of the bandage will give out right around the time the chick’s legs have been corrected.  Some chicks need additional bandages for more severe problems, so the idea is just to use them until they are no longer needed.

Now, back to waiting for goat babies!