One day, about a month ago, I was in a really bad mood.  I don’t remember exactly what had happened to put me in such a mood, but there it was and it was driving my behavior as only bad moods can.  I was snappy and short-tempered and something had to give.

So I bought eight baby chicks.

And then I felt much better. 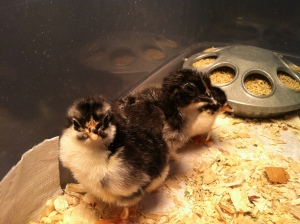 To be clear, I’m normally more of a hatcher than a buyer, but these were extreme circumstances and a quick-fix was in order.

Besides, there was a giant tub of chirping little fuzzy chicken nuggets right in front of me.

The thing about chicks is that the chirping, hopping, adorable phase is relatively short-lived and they quickly outgrow their containers.  Before long, the house smells of chick pee and everything is covered in the dust they’ve kicked up and it’s time to pack their things and send them off into the wide world.

Because I have a Chicken Hatching Problem that is dangerously close to needing the intervention of a 12-step program, we have a fairly solid system in place for moving chicks along the path to Chickens safely and efficiently. 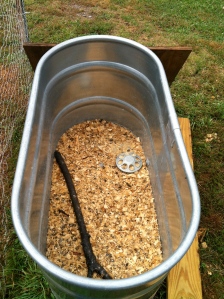 We start them out in a large container indoors.  This is really a giant metal trough, but it works beautifully to house up to two dozen chicks for the first few weeks of life.  We cover the top with chicken wire to prevent Escape by Being Briefly Airborne (although we have discovered the occasional deserter roaming around the living room waiting to be eaten by dogs).

Once the weather is warm enough, the chicks have started to feather enough, and the dust level has become intolerable enough, we move the entire situation outside.

Chicks develop feathers on their wings before their bodies.  Looking at a chick with full wing feathers might trick you into thinking that the chick is fully feathered.  It is worth lifting the wing to have a look-see at what’s happening underneath.  This is important because they really need the warmth and protection of the body feathers to handle colder temperatures, rain, and wind.  Also, it is pretty funny to lift the feathered wing to see the half-nudie little chick body underneath… so there’s that. 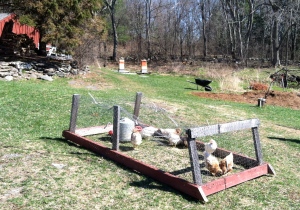 If they are feathery and the sun is out, we transfer them during daylight hours to our Very Fancy chicken tractor.

Here, they can learn to scratch and peck while safely protected from the bullies that are the rest of the flock.  Chickens might just be the biggest bullies in the animal kingdom.  Their inherent jerkiness is not to be underestimated.

The chicken tractor is a great stop-gap measure, but the chicks will certainly outgrow this as well.  So, the next stage is moving them into Separated Coop Space.

When our population exceeded 50 chickens last summer, we knew something had to give.  We built a second coop alongside the original coop and that worked well for managing roosting space and personality differences.  As the summer moved into fall and the chickens were increasingly being plucked out of the woods by foxes and hawks, we found ourselves back down to a one-coop number of birds.

This has proved useful of late. 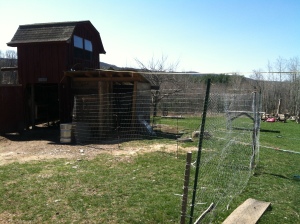 The Auxiliary Coop… because we’re THAT sophisticated

The previously empty second coop has now been turned into a sort of staging area for not-ready-for-the-big-time chicks.

We fenced off a small part of the grassy area and gave them low roosts inside.  We still have the heat lamp set up over the roosts at night in an effort to keep them warm until overnight temps are more pleasant.

The chicks seems to be enjoying their newfound space and freedom.  We won’t integrate them into Gen Pop until they are about 3/4 the size of a fully-grown chicken.  This gives them a fighting chance when dealing with the aforementioned bullying situation. 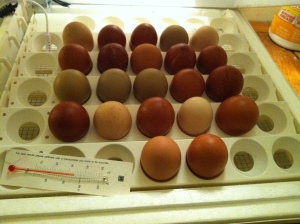 And, most importantly, this move will get them out of the way for the next generation.

Hi.  My name is Laura and I’m a chicken hatcher.

3 Responses to The Chick Panacea