About a month ago, we started setting aside eggs to incubate.

Since our original flock of Rhode Island Reds was starting to thin out, we felt it was time to start replacing those birds in order to maintain a good level of egg production.

Our flock currently consists of seven Rhode Island Reds, Two Bantam Splash Cochins, One Golden Laced Cochin, and five Black Copper Marans.  Of those 15 birds, two are roosters, so we have 13 laying hens which give us between seven and nine eggs per day at the moment.

The number of eggs we get changes based on a number of factors, only about one or two of which we have figured out.

One reason for not laying is that the chickens are molting (which happened back in March and April).  This means they are losing their feathers and putting their energy into regrowing feathers, rather than making eggs.  Another reason is age; chickens are highly productive in their first year or so and can lay an egg a day.

We’re seeing this right now with our Black Copper Marans who just started laying three weeks ago. As they age, however, production slows and can go down to as few as one or two per week. Right now, we have a combination in the flock; our Rhode Island Reds are aging out and slowing down production, but our Marans and Cochins are solidly in their first year of laying and are enthusiastic and prolific.

So, a little over three weeks ago, we started putting eggs in the incubator.

The eggs at the bottom of the pic are the RIR eggs.  They are the largest by a long shot–imagine the extra large eggs you buy at the supermarket on steroids–then a little bigger.  Above that row on the left are the smaller, speckled Golden Laced Cochin eggs, and then on the right and above that, the teeny Bantam Cochin eggs.  We started this batch on April 18th.

The incubator itself is a pretty good model.

Someone on BackyardChickens.com (I did not make that up, by the way) recommended it to me and we’ve been looking forward to this opportunity to take it for a spin.  This model has a self-turning mechanism, which is great, but not at all a necessity as turning eggs by hand is in no way a hardship.

The main task for the human involved is maintaining the proper heat and humidity levels. This was a task that required relatively constant tweaking and checking.

This is the top view of the incubator.

The little red knob below the gauge controls the temperature.  There are two holes with red plugs, one at the very top of the machine and one at the very bottom, that help control the humidity.

In this picture, you can see that the red plug at the bottom is in, but the one at the top has been removed.  We did a lot of this manipulation in an effort to control the humidity.  Not difficult, but definitely time consuming, especially once the hatching starts.

Speaking of hatching, our first chicks appeared a day early and surprised us totally.

We completely missed the first shells cracking or any of the process at all, for that matter. We’d been away for about five hours, and I realized I hadn’t checked the temperature or humidity levels for at least seven hours.

I ran to the incubator to fiddle with the settings to find this: 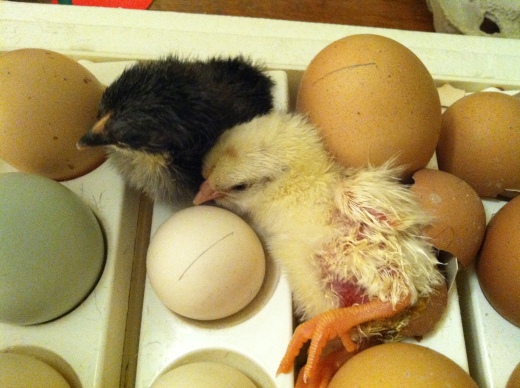 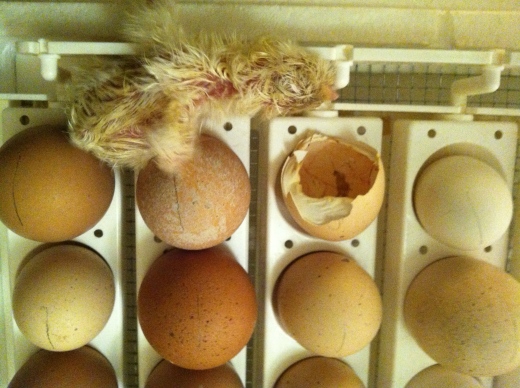 Admittedly, we were fairly shocked.

Despite the fact that we’d gone through this entire process and knew that our eggs were fertile for the most part, we just didn’t expect this first batch to actually produce real, live, honest-to-goodness chickens.

Now, all of a sudden, we had three.

And then we had three more.

We’d set up an area in the basement for the newly-hatched chicks to develop in until they are ready to move outside in a few weeks.  In this space, they are under a heat lamp and have food and water available to them.  Within a couple of hours, the six chicks were fluffed out and learning to drink water and eat food.

And just as we were starting to think this whole thing was a cinch and hatching chicks couldn’t be easier, we encountered a bit of a bump in the road.

Two of the chicks had started to hatch on the afternoon of the 2nd.  We kept an eye on them, but by the time we were going to bed that night, almost no more progress had been made.

In our extremely limited experience with hatching, we didn’t know much, but we did know that it didn’t seem to take chicks 12 hours to leave the shell.  Once the process started, it seemed to be complete within about five hours, give or take.  When we got up the next morning, both eggs were still in the exact same condition.

We started to research our options.

We learned that some chicks are too weak, for whatever reason to complete the hatching process unassisted.  While you should never assist a chick that has shown no signs of hatching, we found ourselves in a situation similar to a woman’s water breaking, but the baby still not being born.

Intervention was called for, or the chick would run out of nutrients and moisture and die in the partially-cracked eggshell.

We started by creating a “zipper” carefully around the entire shell.

Using a dull tweezers, warm water, and a warm, wet washcloth, we removed the shell bit by bit, being careful not to cut through the membrane.  We dripped warm water onto the membrane in an effort to soften it, so that the chick could try to emerge on its own once the shell was out of its way. 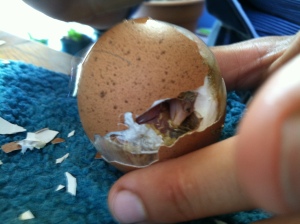 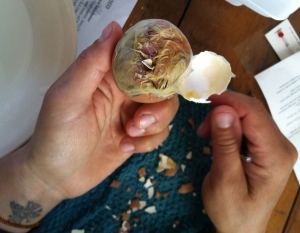 We could see where the chick’s beak was, and knew that it was important to keep the water on the membrane, but nowhere near the beak.  Chicks are prone to drowning and even the smallest drop of water could drown it.

Here you can see the surreal image of the chick still contained within the membrane, but free of most of the surrounding shell.  This chick was exhausted and once we had the shell removed, we could tell it had no energy to get free of the membrane either.

We discovered that no amount of water was going to soften the membrane fast enough to save this chick.  We decided we needed to carefully remove the membrane as well.

We had to repeat the identical process with the second chick who was also not progressing.

Once this was done, we placed both newly-freed chicks back in the incubator to warm up and dry out.

Unfortunately, when we checked back on them a little while later, they had totally dried out and were literally stuck to the bottom of the incubator, unable to move.  Next, we put them on warm washcloths to keep that from happening again.  We didn’t feel they were ready to move down with the other chicks yet, so we hoped this would work.

The next time we checked, they’d both rolled off the washcloth and were jammed into a crack between two of the incubator shelves.

This is when it got Darwinian.

We figured we’d done what we could and these little guys were either going to make it or they weren’t.  We moved them down with the rest of the chicks and placed them under the heat lamp.

They both promptly fell into the pine shavings face-down and fell asleep.

Over the course of the next few hours, however, they started to move around and dry out. By the next morning, they were verging on fluffy, although they still looked like they could use some assistance with a fairly aggressive matted feather problem.  They had learned to walk.  They were eating and drinking.  They seemed to have survived.  The ninth chick hatched, problem-free, late last night.

This last one was our first Bantam hatch and a Bantam chick might be the smallest non-insect living creature that we’ve ever seen.  The fully-formed chick was about the size of a large gum ball, but was up and walking within minutes of hatching.

We let this one spend the night in the incubator and moved it down with its new flock this morning.

The three black and three yellow chicks are the ones that hatched, problem-free, over the first 24 hours.  The two scraggly looking birds are the ones that were “hand hatched,” and the brand new Bantam is snuggled between the two black ones at the bottom center of the picture.

This will give you an idea of size.  Pretty cute, huh?